Home Uncategorized Can Averments In Pleadings Form The Basis of An Action In Libel? 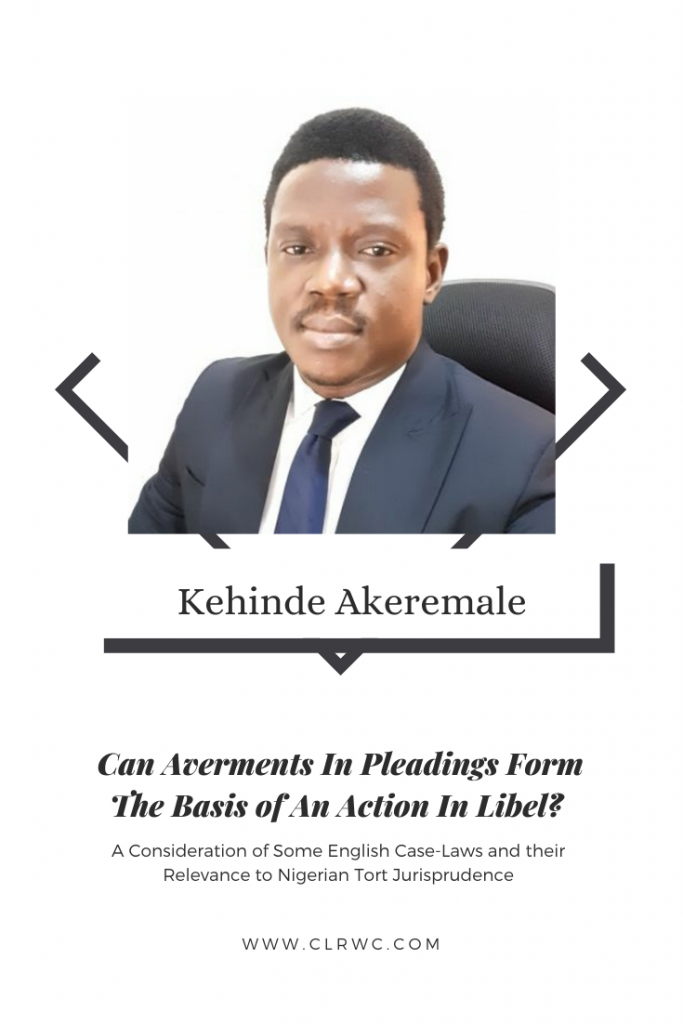 Can Averments In Pleadings Form The Basis of An Action In Libel? By Kehinde Akeremale

Libel has been defined as a statement in written form which causes a person to be exposed to hatred, ridicule or contempt i.e. to be shunned or avoided and to be lowered in the estimation of right-thinking people in the society.

In other words, libel is the publication of false and disparaging matter against a person to a third party. Libel has publication as one of its three components. The remaining two being whether the words complained of were published by the defendant and whether the words referred to the plaintiff.

The defences to libel are absolute and qualified privilege, justification or truth. Truth as a defence means that the alleged libel is true in substance and fact, that is, the offending words are substantially true. When is a cause of action in libel complete? The court has held that once the plaintiff in a libel case proves that a libel has been published of him without legal justification, his cause of action is complete.

The position of the law is that statements made in the course of or in connection with judicial proceedings are absolutely privileged. Thus, any statement emanating from judicial proceedings cannot give rise to a legally cognizable claim in libel. This position has long been established in a long line of judicial authorities. Thus, in the case of A. A. Ufua v. F. A. Eborieme (1993) LPELR-23674 (CA), the Court of Appeal summed up the whole gamut of the defence of qualified and absolute privilege when it held as follows: 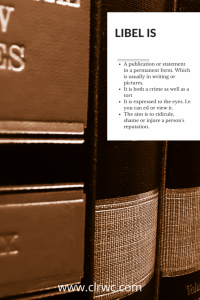 It is important to note that the defence of absolute privilege is not defeasible by malice. And as such, even if a claimant is able to establish that the defendant was actuated by malice, it will avail not him in order to negate the defence of absolute privilege. According to Gatley on Libel and Slander, 12th Edition, at page 483, the learned author posited with respect to the subject matter as follows:

“No actions will lie for defamatory words spoken by an advocate in his professional capacity in the course of an inquiry before a judicial tribunal, even though they were uttered maliciously and not with the object of supporting the case of his client and were entirely irrelevant to the subject-matter of his enquiry…”

“With regard to counsel, the question of malice, bona fides, and relevancy, cannot be raised; the only question is whether what is complained of has been said in the course of administration of the law.”

The application of absolute privilege is not limited to words spoken by a counsel, it also covers any statements in a pleading, witness statement or other documents incidental to the action. Herein lies the core of this write-up. This position was judicially crystallised by the English case of Pedley & May v. Morris (1891)61 L.J.Q.B. 21.

Similarly, no action will lie against a party to an action for any defamatory statements made by him in the documents brought into being for legal proceedings when being used for that purpose, e.g a pleading, affidavit or answer to a request for further information. 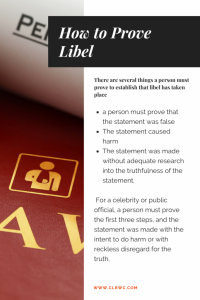 It must, however, be noted that privilege does apply for publication of pleadings to others than the parties and the court; nor is there absolute privilege for statements by a litigant to the media about the merits of his case. In the same manner, the absolute privilege protects anyone conducting his own case in person, either in a civil or criminal court, to the extent that statements by an advocate acting on his behalf would be protected as held in Boulton v. Clapham (1640) Sir W. Jones 43.

Needless to add that this privilege applies to judges in the performance of their judicial duty. Consequently, no action will lie against a judge for defamatory words used by him while acting in his judicial capacity even though such words were spoken maliciously and without any reasonable or probable cause. Thus, in the immortal words of Scrutton L.J. while expounding this rule in More v. Weaver [1928] 2 K.B. 520 at 522:

“A judge is not privileged to be malicious, but he is privileged from inquiry as to whether he is malicious.”

In another notable pronouncement in respect of the same issue, the English court held:

“If his judicial duty is transgressed, there is a remedy of a constitutional character through the action of Parliament, but there is no remedy by way of an action at law.” – See Nadeau v. Texas Co, 69 P.2d 586 (Mon., 1937) where the court had ordered that a “scandalous, scurrilous and defamatory” opinion by one of the judges should be struck from the record and not published.

Also, in Anderson v. Goriie, [1895] 1 Q. B. 668, it was held that no action lies against a judge of a Court of Record in respect of any act done by him in his judicial capacity, even though he acted oppressively and maliciously, to the prejudice of the plaintiff and to the perversion of justice.

Also, the Nigeria Supreme Court echoing the above principle in Egbe v. Adefarasin (1985) NWLR (Pt.3)549 (1985) 5 S.C 50 had cause to make a pronouncement on the questions bordering on the liability of judges for libel and held in a similar fashion, precisely on whether an action is maintainable against a judge for anything said or done in the exercise of a jurisdiction which belongs to him, as follows:

“The most recent statement of the position is in Sirros v. Moore (1974) 3 All E. R. 781 – 782, in this case, Denning MR, said, “Ever since the year 1613, if not before, it has been accepted in our law that no action is maintainable against a Judge for anything said or done by him in the exercise of a jurisdiction which belongs to him. The words which he speaks are protected by an absolute privilege. The orders which he gives and the sentences which he imposes cannot be made the subject of civil proceedings against him. No matter that the Judge was under some gross error or ignorance, or actuated by envy or hatred and malice and all uncharitableness, he is not liable to an action. The remedy of the party aggrieved is to appeal to a Court of Appeal or to apply for habeas corpus, or a writ of error or certiorari or take some such step to reverse his ruling. Of course, if the Judge has accepted bribes or been in the least degree corrupt, or has perverted the course of justice, he can be punished in the criminal courts. That apart, however, a Judge is not liable to an action for damages.” PER KARIBI-WHYTE, J.S.C.(Pp.18-19, paras. F-D) (…read in context)

‘Suits against High Court Judge in our Courts are extremely rare. This appeal is strictly speaking not such an action. The claim is essentially a challenge as to the validity of the act of the Judge, and a public officer in the discharge of their duties as a Judge or such officer.’

The Court further expatiated the reasoning and ratiocination behind the rule as to why Judges are exempted from being sued for acts done in their judicial capacity as follows:

The principle of law, of exemption from being sued for matters done by Judges done in their judicial capacity, is of great importance. It is necessary to the free and impartial administration of justice, that the persons administering it should be uninfluenced by fear and unbiased by hope” Per KARIBI-WHYTE, J.S.C (Pp.19-20, paras.G-A.)

The Court of Appeal in the case of African Newspapers of Nigeria Plc & Anor. v. Useni (Rtd) (2014) LPELR-22954(CA) attempted a definition of this defence thus:

“In First Bank Nigeria PLC v. Aboko (2005) LPELR-7494 (CA) Aderemi JCA (as he then was) stated: “The term “Qualified Privilege” would seem to defy direct definition. It seems to me that for a proper understanding of what it connotes, an explanation, in words, is the proper approach. Generally, court action for a redress lies for the malicious publication of words or statements that are false in fact and injurious to the character and reputation of the person seeking the redress. The law considers the publication of such false and injurious words or statement as malicious unless it can be established that the person who makes the communication of such injurious and malicious words is a person who has an interest or a duty – be it legal, social or moral – to make it to the person to whom it was made and that the person to who it was so made has a corresponding duty or interest to receive same. In other words, in law, a communication bona fide, made upon any subject matter in which the party communicating has an interest is privileged and in legal parlance, it is said to have been made on a privileged occasion and therefore a defence of qualified privilege will avail a person who is sued as a defendant in such circumstances. 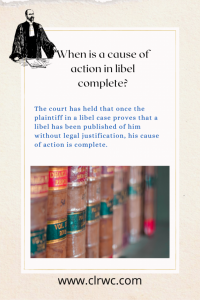 In other words, by this defence, a defendant in a libel case is saying no more than that even though the words complained of may be defamatory of the person of whom it was published to the person or persons whom the law recognises as persons who have a corresponding interest to receive it, the defendant cannot incur any legal liability if the publication was not actuated by malice.

So that, when the words published are made honestly and without any indirect or improper motive, a person sued as a defendant can legitimately take cover under the defence of qualified privilege, he will be immune from liability.

The Supreme Court pronouncement on the scope of the defence of qualified privilege in Citi Bank Nigeria Limited v. Mr Martins Ikediashi (2020) LPELR-49496(sc) is apposite here.

It is important to note that in order to successfully dislodge a defence of qualified privilege, a plaintiff must specifically plead and lead evidence to establish malice.

In conclusion, it is clear from the foregoing overwhelming authorities that averments or statements contained in pleadings or statements made by judges in the course of judicial proceedings are covered by absolute privilege; and as such, it can safely be posited that they cannot ground action in libel since such occasions are said to be absolutely privilege. On the other hand, occasions of qualified privilege afford a limited defence in the sense that the defence can be destroyed by leading preponderant evidence in proof of malice.